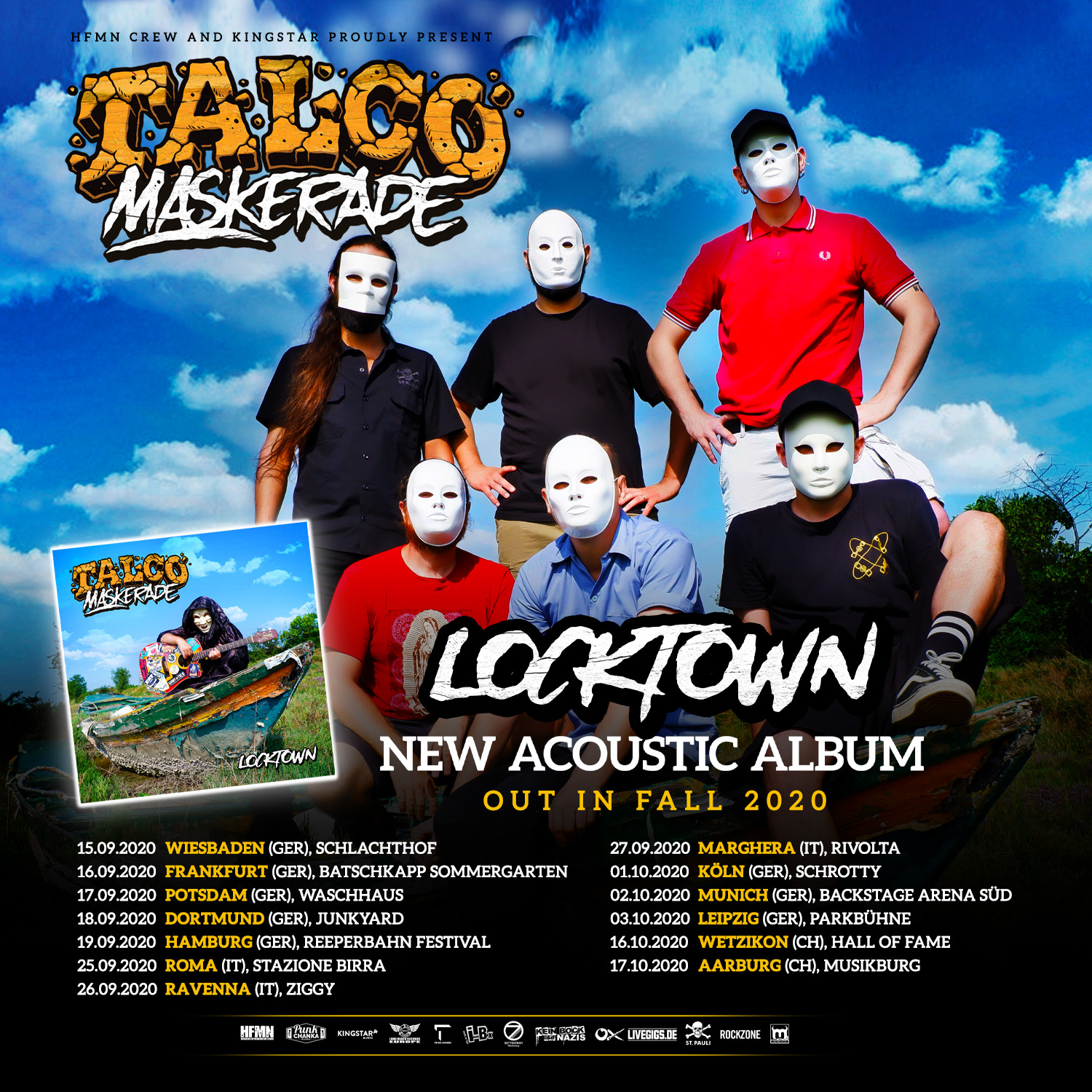 Fuck covid-19! Talco​ will be coming on tour with their new acoustic-project TALCO MASKERADE this September and October!!!

All shows are in accordance with security measurments, social distance rules, and hygiene measurments. The shows are seated shows.

Here#s the overview of the dates. Presale starts now!

Tickets for Munich to be found here: https://merchunion.com/tickets/ETicket-Talco-Maskerade-Mnchen-02102020-Open-Air-85_227.html

Of course, Covid-19 also affected TALCO’s plans to a vast degree: it was intended to release the new studio album VIDEOGAME in Ocotber 2020, an excessive tour to present it was booked fort he beginning of 2021. Obviously, things turned out different. The band was locked down in the area of Venice, a high-risk area of the virus‘ outbreak. There was no chance to leave the house apart from running essential errands. No social contacts in real life and travelling to go on tour, was for sure not possible. But instead of giving up and falling into apathy, the band quickly decided to work on acoustic versions of their beloved tunes and they started to stream some of those sessions. They did it for themselves, to keep going and also for all their fans to give them something back during those weird times. Parallel to that, Dema, singer of TALCO, started to work on fresh and new material. More intimite, more basic and bit more back to his roots.
But TALCO would not be TALCO if this was simply an acoustic get together. What we find here with TALCO MASKERADE, is a new incarnation of the band: new instruments all approached by the accoustic sonoroties, with all TALCO members being involved as well as some additional guests with new strains that will bring you to another, totally new world!

The definition of masquerade as a party or a dance at which people wear masks closely associated with Venice, from where the band comes from, as well as a behaviour that is intended to prevent the truth about something unpleasant which is not wanted to become known, or to pretend or appear to be someone else is the cornerstone of the concept of TALCO MASKERADE. While the world masked up, while the media is full of infos hard to decipher, while social media became a tool whereto act in disguise, pretending to be someone else, it is time for TALCO to rough the maskquerade up, visually depersonalizing each member to function as a mirror in order to sensitize for those topics.