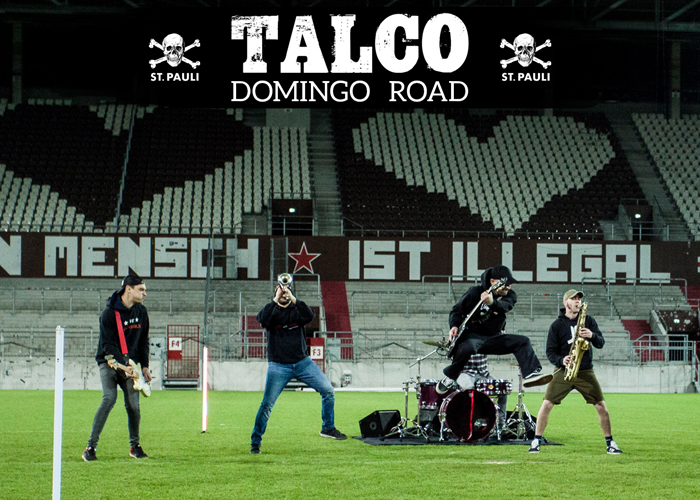 TALCO’s newest video, Domingo Road, is the third single to be released from the album  AND THE WINNER ISN’T (Long Beach Records Europe).
The video is being premiered now at the website of famous soccer club FC St. Pauli:

After having played a sold out release tour in the beginning of the year, and shortly before the festival season starts, TALCO strike up an anthem for a sport without sexism, xenophobia, corruption and doping with the help of FC ST. PAULI players Jan-Philipp Kalla, Richard Neudecker, Johannes Flum, Philipp Heerwagen, as well as senior manager Ewald Lienen.

“Sunday was a sort of ritual for us supporters, a form of carnival, a local festivity where our passion for soccer clung to the spirit of morality, honesty, collectivity and decency. That world was drastically ruined by the modernity’s immoral furor, where the businesses and corruptions of managers and soccer institutions, the doping, the xenophobia in the stands, the sexism and mundanity have invaded a game that was simple and exciting.”
This is how Dema, singer of TALCO, describes his current feelings about modern soccer.

To stand up against such developments, to be loud and protest against it, in order to bring back what has been lost, is exactly how you can summarize the song “Domingo Road” according to Dema.

“It fills us with pride that we have the opportunity to stand up for a more equal and fairer sport together with legendary FC St. Pauli, as those are topics that matter to us as much as to them!”