Check this out, TALCO will be heading to four special cities in December to celebrate their 15 year anniversary big time!
These are the last club shows before they head back to the studio to work on their next album, which will be out in fall 2020!!!

Maghera
Tickets: 10€ Only at the Door
Event: http://bit.ly/2MuJMAx-CsRivolta 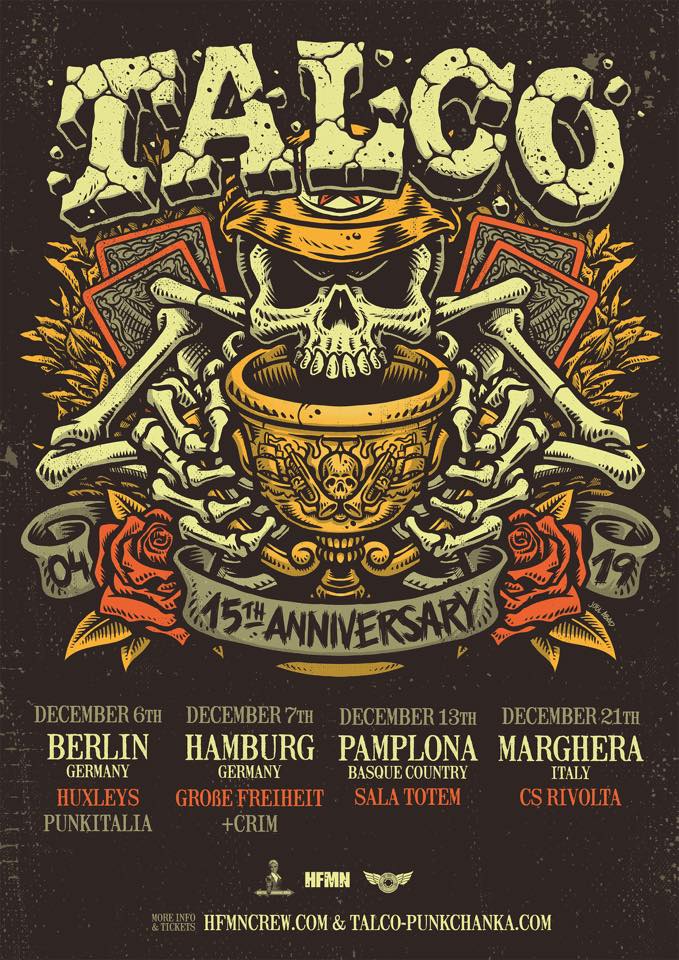 Read the full statement of the band right here:

Beloved friends of TALCO, we have great news to share. We want to celebrate our 15th anniversary on the road with you. And we we´ll do it at some of the cities where we feel specially loved by you, the people who come to dance and sing and protest with us; you, that have never missed a show through all these years.

– Berlin: this is, with no doubt, the city that gave us the oportunity and opened the gate to Europe for us; and, to make it even better, we´re coming back hand in hand with the people that gave us that first opportunity, wich is no other than the PUNK ITALIA BERLIN festival, that is also celebrating their 15th anniversary along with us.

– Hamburg: is widely known the special relationship we have with St. Pauli, the most original and groundbreaking football club within the old continent, wich shares with us the same values and colors. In Hamburg, every TALCO show is a huge party, and we could not leave aside the opportunity of coming back and celebrate one more time.

– Pamplona / Iruña: we´ve played at almost every corner of the spanish peninsula, but Pamplona is one of the cities where we´ve felt specially loved and well treated every time we´ve been, where we´ve met some of our best friends until the present day. We´ve also recorded there our 10th anniversary live album. It´s always an honor to play Iruñea again.

– Marghera: After playing all around the world, we have to say that there´s no place like home; it´s our city, our hometown, and we want to celebrate it with all the people that has seen us born and grow as a band and as humans beings. We´re playing again at CS Rivolta, the social center that gave us some of our first opportunities to play live and also influenced us on how make the world a better place.

.
These will be 4 intense shows; we´ll play songs from all our albums, we´ll screen a short 30 min documentary and we´ll have very special guests with us every night and last but not least important, we´ll be with all you back again!
.
These also will be the last club shows before we go to record our new album that will be released fall 2020.